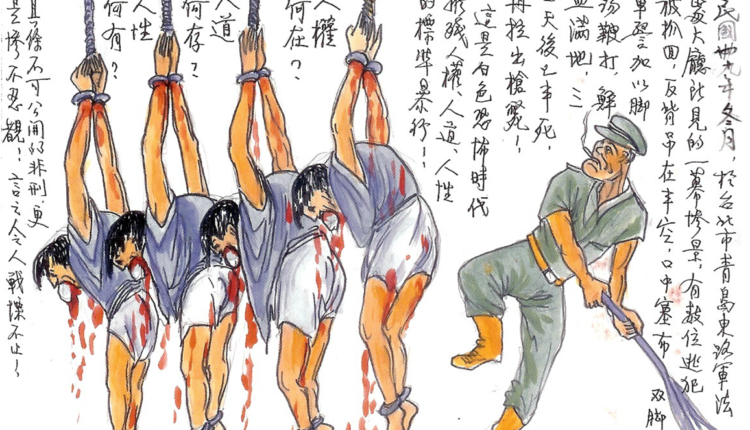 In this, the first of a three part piece looking back at Taiwan’s period of White Terror, and to coincide with the 73rd anniversary of the ‘228 Incident’ that took place in February, 1947, Charlene Lin takes us through depictions of those dark days as they are remembered today – in art.

Ouyang Jian-Hua, an artist who survived 10 years of brutal prison life used his time behind bars to later create vivid paintings based on the scenes he witnessed in prison.

He depicted how inmates were interrogated, and brutally tortured, by methods that included suspending the prisoner above the floor by his or her thumbs, 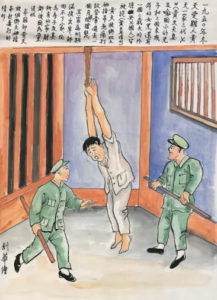 Removing a person’s fingernails during interrogation, and even covering them in sugar water before throwing them into a swarm of ants with hands tied so that the ants could sting all over the body were all commonplace in these images. 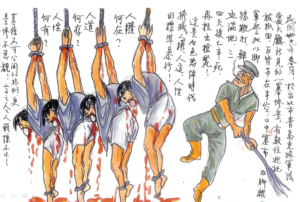 One painting depicts the untimely birth of a child during an interrogation. After Lee Tsang-Jiang, a victim of the White Terror was arrested, the government also interrogated his wife. In in her eighth month of pregnancy at the time, she was hung from a pillar using her own hair, before being beaten with wooden sticks. Traumatized, the infant in her uterus left her body and fell to the ground below.

Many years later this same infant, Lee Su-Hui, graduated from the NTU Medical School to become the a doctor renowned in his field. 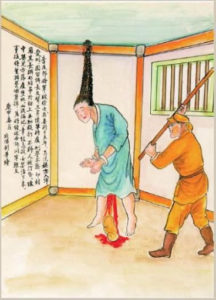 Other imagery depicts the end of human life in those dark days.

In the wake of executions, the funds required to return the body of a prisoner who had been executed, was equivalent to roughly twice that of an average household’s monthly income. Unclaimed bodies were either buried by the government, or sent to the National Defense Medical Center (NDMC) to be used in experiments or for autopsy practice by students.

The untimely disappearance of once such NDMC medical student Huo Jen-Jiang, later led to his classmates only learning his fate when he turned up on their own autopsy table. Huo’s fellow students, unable to face using their former classmate as teaching material decided not to dissect his body and pooled their money to bury him properly.

Agents involved on the side of the state were known for their cruelty and their exceptionally skilled manipulation of humanity during interrogations. One diary of such an agent, disclosed in the 1990s, even described his victims as “funny and pathetic”.

Charlene Lin is a new member of The Taiwan Times team. See her profile on our Meet the Team page below, and look for Pt II in this series on ‘Emerging Innovative Artworks of the 2010s’ tomorrow … 2/27

A Business major at National Taiwan University, Charlene Lin will be covering business-related topics for The Taiwan Times in addition to issues related to the history of the country, and observations on Taiwanese society.