The post has been shared by 27 people.
Facebook 27
Twitter 0
Pinterest 0
Mail 0
The Agency for Cultural Affairs presents "CULTURE GATE to JAPAN" OSAKA, Japan, March 24, 2021 /PRNewswire/ -- On March 20, 2021, Japan's Agency for Cultural Affairs opened an art exhibition at Kansai International Airport as part of a wider project entitled "CULTURE GATE to JAPAN". Multimedia artworks by eight artists will be exhibited at the airports and online in order to promote the appeal of Japanese culture around the world.
[caption id="" align="aligncenter" width="600"] 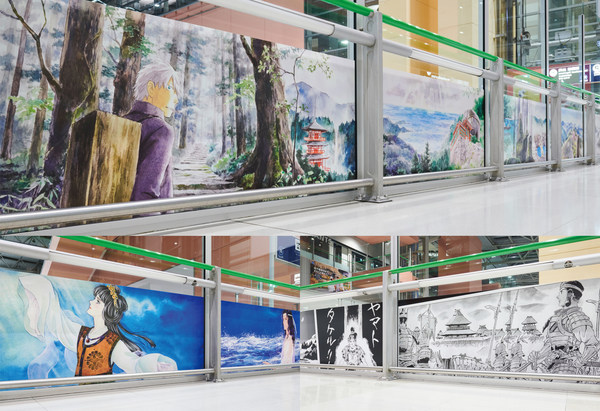 "The Pilgrimage Route" by URUSHIHARA Yuki (above), "The Sea Route" by SATONAKA Machiko (left bottom), "The Mythology Route" by YASUHIKO Yoshikazu (right bottom)[/caption]

Since antiquity, the Kansai region of Japan has been a focal point of the country's flourishing politics, commerce, and culture.

Even today, remnants of these historical sites and traditions remain. The diverse lifestyles and cultures found within the region were largely shaped by the surrounding geography – it's mountains, rivers, seas, and more.

The jagged San-in coastline, created when the Japanese archipelago separated from mainland Asia millions of years ago, resulted in a number of natural harbors. Lake Biwa, the largest lake in Japan, supplied fresh water to the entire Hokuriku region.

The islands of Awaji island and Tokushima are home to some of Japan's oldest creation myths. And the historical areas of Ise and Nara in the Kii Peninsula, with is bizarre rock formations, virgin forests, and local craft culture, are the setting for some of the country's most enduring legends. The natural geography and resources of each area greatly influenced the development of regional culture, each with their own unique distinctions.