The post has been shared by 1 people.
Facebook 1
Twitter 0
Pinterest 0
Mail 0
The newest venture of Royal Park Hotels and Resorts Company, Ltd. aims to connect travelers and locals in Kobe, a bustling city with sets of unique small shops and restaurants. Following recent launches in Osaka and Kyoto The Royal Park Canvas - Kobe Sannomiya is the group's first hotel in the Hyogo Prefecture further strengthening its presence in the Kansai area, in the West of Japan. TOKYO, Jan. 19, 2021 /PRNewswire/ -- On January 21st, 2021 Royal Park Hotels and Resorts Company, Ltd. (https://www2.royalparkhotels.co.jp/) opens the doors of its newest hotel, The Royal Park Canvas - Kobe Sannomiya (https://www.the-royalpark.jp/canvas/kobesannomiya/en/). 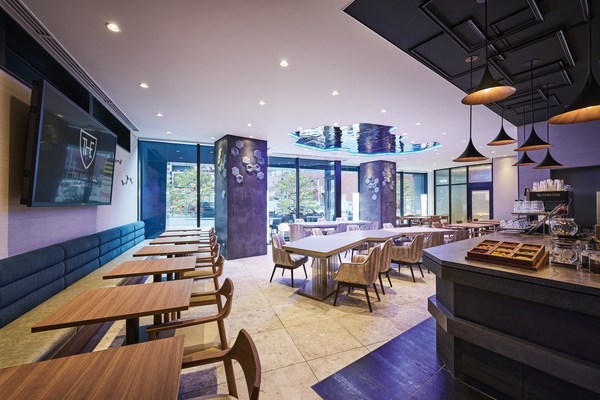 The "CANVAS Lounge" is a great space to start or finish the day, with tea or coffee. It is open to hotel guests and locals alike and meant to stimulate exchange and communication.

With its stylish interior, the new 170-room Lifestyle Hotel wants to appeal particularly to couples and families who appreciate a stylish though authentic environment and like to connect with the local culture. Both interior and exterior designs of the hotel embrace images of the ocean and the mountains which are surrounding the city. One of the hotel's prime features is an open structure, the "CANVAS Lounge", which links with the terrace. A great space to start or finish the day, providing tea and coffee, it is open to hotel guests and locals alike and meant to stimulate exchange and communication. The hotel is also planning events open for travelers and citizens such as jazz performances, since Jazz music came to Japan through Kobe, other music events and maybe classes in local handicrafts. Kobe, globally known for the famous Kobe beef, is the 6th biggest Japanese city located in Hyogo Prefecture, Kansai, in the western part of Japan. Less than 40km from Osaka, the famous port city, which was one of the first to open to foreign trade in the 19th century, Kobe has become increasingly popular as a travel destination in Japan charming its visitors with a mix of cosmopolitan atmosphere and local Japanese traditions. Sannomiya is the center of Kobe city and the hotel is located in a bustling area with small quirky shops and restaurants. Kobe-Sannomiya has a history of traditional and unique shops as for example "Maxim". The famous hat shop established in 1940, has been providing headgear to Japan's Olympic athletes, airlines and the imperial family for decades. The area Sannomiya is also well-known for its many varied international and Japanese eateries. Kobe is also known as the cradle of "Yoshoku" which is a style embracing Western foods with a particular Japanese-style adaptation. "We are very much looking forward to welcoming our guests to our new hotel and the city of Kobe," said Mr. Yuichiro Miura, General Manager of The Royal Park Canvas - Kobe Sannomiya. "Kobe is truly a gem for visitors to experience with its open and welcoming culture that embodies both traditional and cosmopolitan facets. Being at a short distance from Osaka, Kyoto and the UNESCO World Heritage Himeji castle, it is also the perfect base to explore the Kansai area. There are hardly any lifestyle hotels in Kobe and its surroundings and we feel that The Royal Park Canvas - Kobe Sannomiya appeals to travelers looking to truly connect with the local culture." Convenient location Accessible from three airports, Shinkansen and local train stations About Royal Park Hotels and Resorts Company, Ltd Royal Park Hotels and Resorts Company, Ltd, which forms part of the Mitsubishi Estate Group, one of the leading real estate developers in Japan, currently operates 14 hotels with a total of 3,569 rooms all in the Upper Grade to Mid-Grade segment including this new launch. The company's THE series concept includes three lines with differentiated focus ranging from the functional and value-adding The Royal Park, to the eco-conscious and healthy lifestyle promoting The Royal Park Canvas and the sophisticated The Royal Park Iconic. Following the launch of the new The Royal Park Canvas - Kobe Sannomiya the hotel group plans to launch a further 3 hotels with a total of over 550 rooms in 2021.