The post has been shared by 0 people.
Facebook 0
Twitter 0
Pinterest 0
Mail 0
SEOUL, South Korea, April 7, 2021 /PRNewswire/ -- Air Products (NYSE: APD) announced today it has recently opened a new hydrogen fueling station at its industrial gases facility in Ulsan City, South Korea. Built with Air Products' state-of-the-art hydrogen fueling technology and operated by the Company, the station is the first station built and operated by the private sector in the city under the South Korea government's subsidy program. It is part of the Company's ongoing commitment to Ulsan City, which houses the country's hydrogen industry hub and is one of the three pilot cities in the national hydrogen economy roadmap. 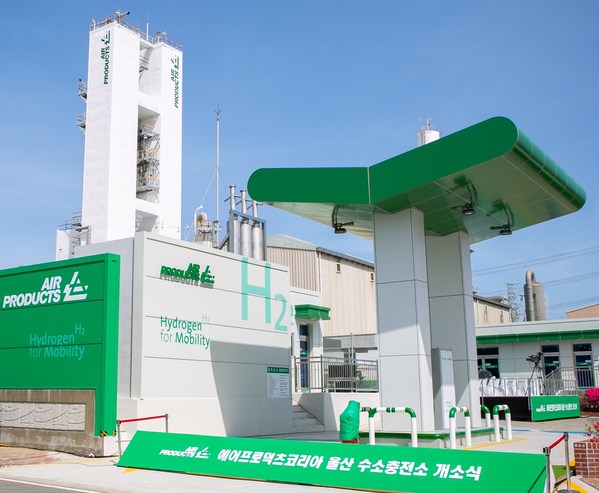 A world-leading industrial gases company serving the South Korean market for close to 50 years, Air Products has established a leading position in the country and has been supporting hydrogen demonstration projects for over a decade. Ulsan, the country's largest hydrogen production and distribution city, has been designated as a Free Trade Zone for hydrogen mobility development.  It was the first city to operate hydrogen buses and taxis and has established itself as the center of hydrogen fuel cell vehicles. "Hydrogen and fuel cell technologies are part of the solution to the energy and environmental challenges of today and tomorrow," said Kim Kyo-Yung, president of Air Products Korea. "As the world's largest hydrogen producer and a global leader in hydrogen technology, Air Products is committed to supporting South Korea to realize a hydrogen-powered society through our expertise across every aspect of the Hydrogen for Mobility value chain." South Korea is one of the leading countries to develop a hydrogen-based economy. Its hydrogen economy roadmap includes a goal of producing 6.2 million fuel cell vehicles and rolling out at least 1,200 hydrogen fueling stations by 2040. With over 25 years of experience designing fueling stations and over 60 years of experience producing hydrogen, Air Products provides comprehensive solutions, including production, liquefication, storage, transportation and innovative fueling technology systems and related infrastructure and has made significant investments to accelerate the transition to zero-carbon transportation. Air Products has been involved in over 250 hydrogen fueling projects in more than 20 countries around the world and its technology has been used in over 10 million hydrogen fills to date. Air Products is also playing a lead role in helping address significant energy and environmental challenges through projects like NEOM –the world's largest carbon-free and truly transformative hydrogen project.